Lagos has become famous for waste exports. Its eminent landfill, Olusosun boasts a 100-acre area, making it the largest waste site in Africa and one of the largest in the world. That status features little in Nigerians' interactions with waste—when we throw rubbish in the bin, we don't often consider the process of trash being transported, exported or even affecting our immediate spacial area.

Years ago, the issue of trash appeared to be easily solved, with trucks coming to take the rubbish and depositing it in a dumpsite or recycling plant. The service was provided by the state, and the problem was seen as their problem as opposed to an individual one. This method has been in practice in Nigeria since 1992 but as we enter the new decade, do these quick fixes still work?

The world certainly has a waste problem. According to a report by the World Bank, by 2025, waste produced by communities around the globe will be enough to fill a 3,100-mile line of rubbish every day—the equivalent of travelling from Nigeria to Algeria. Yet, it has been estimated that our waste generation will double by 2050. Not solving this problem is clearly a route for disaster.

With the fourth industrialisation bringing more technical products to consumers, waste has become more harmful due to the chemicals and metals used in batteries, phones, laptops and in some cases, toys. Meanwhile, devices like phones are now being replaced more frequently, increasing the problems created by electronic waste (e-waste).

Truckloads of e-waste are illegally smuggled from developed countries into Lagos, creating public health and environment concerns due to their toxic components. These concerns were echoed by Nigeria's Minister of State for the Environment, Alhaji Ibrahim Jibril, saying, "E-waste is a real challenge and an environmental hazard. There is a concerted effort by major players in the world to tackle it.”

However, not all e-waste is illegal as some are imported legally based on their high value; a lot of second-hand electronic products or components are resold in Nigeria. In 2017, Nigeria saw 290,000 tonnes of imported e-waste. 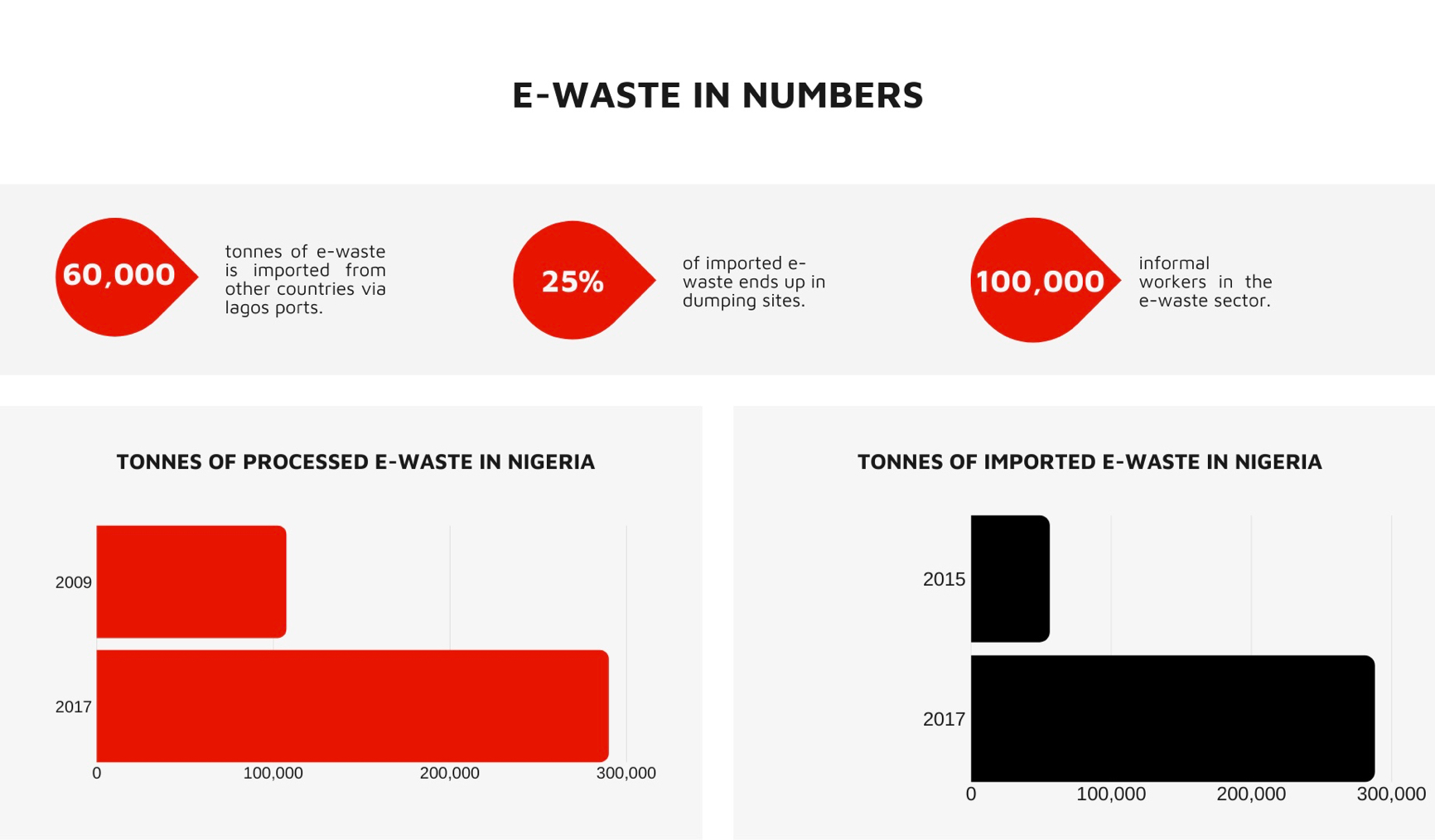 International players in the E-waste sector

Recycling has been accepted as a major solution. And it's not a foreign idea to Nigerians: the term "Okrika" refers to clothes that have been recycled through its sale as a second-hand item.

Similarly, when referring to the notion of e-waste recycling, the concept of "circular economy" is applied. It is defined as an economic system aimed at eliminating waste by continually using resources. But it goes further than recycling. Any type of waste is eliminated by designing products from the start with reuse in mind, i.e. "made to be made again".

Nigeria's recent trade partnership with the Netherlands provides some opportunities. Nigeria will be a supplier of waste, which will aid the Netherlands' production of recyclable technical products. The Netherlands gets access to cheap raw materials while Nigeria solves its e-waste problem. The partnership could also aid Nigeria's future endeavours in cultivating a circular economy as we benefit from information sharing and Dutch businesses setting up shop in Nigeria.

To see how circularity works in practice, let's take a look at one of the companies on the Netherlands' trade mission to Nigeria: Closing the Loop.

The organisation is looking to make IT industry waste-free, starting with mobile phones and has a unique position in e-waste trade in Nigeria as they collaborate with two local partners (Hinckley Recycling and Verde Impacto) who help them collect e-waste from all 36 states.

Their network is built up by local partners who help them collect phones which are bought off individuals primarily in the informal economy. This is done via a range of social networks such as churches, computer villages, repair shops, and schools. The phones are then shipped to responsible recycling facilities (currently only in Europe) where they are recycled into the raw materials. These raw materials are extracted and sold as responsible materials to for example the jewellery industry.

A similar process is done for batteries. This is key as it reduces energy consumption, reduces greenhouse gas emissions, and results in considerable natural resource savings.

Can Nigeria develop its own Circular Economy?

“Nigeria is an attractive destination for waste exporters, partly due to the limited enforcement of import restrictions and other regulations.” - UN Environment

One of the biggest roadblocks to mass recycling and dealing with waste in Africa is the lack of legal frameworks.

When the waste regulations are not properly enforced, you get cases of burning copper cables, fridges and mobile phones or individuals dropping acid on the ground to get lead out of batteries. This causes both environmental harm and potential physical harm to the individual. Closing the Loop’s partners are currently working with the Global Environment Facility to set up a legal framework for recycling electronic waste in Nigeria. This opens the door to proper recycling—without it, Africa will not likely be a viable option for setting up a recycling plant.

Internal efforts by the Nigerian Government and stakeholders in creating solutions to the e-waste problem can be seen in the Circular Economic Approaches for the Electronics Industry programme. The initiative focuses on raising awareness of the impacts of dangerous e-waste and strengthening the enforcement of Nigeria's expanded regulations on supplier accountability.

Although a noble policy move, enforcement remains unclear as legislation can only determine a certain level of change. The biggest problem lies in culture and behaviour, which are too often ignored.

Despite the big waste problem, there are opportunities in the recycling side of things from an economic development standpoint. According to the International Labor Organization, close to 100,000 people work in Nigeria's unregulated e-waste processing market, and more than half a million tonnes of household appliances are handled in Nigeria every year. This highlights the potential for the development of a circular economy in Nigeria to not only be an environmental solution but also an opportunity for job creation.

The Netherlands is looking to become a completely circular economy by 2050, i.e. a zero-waste economy. While Nigeria is far from such a target, there is room for both individuals and the government to do more to make better use of waste in the country.