Lagos does not earn enough (Part 2)

This article is Part II of a Series. Read Part I here.

“Internally generated revenues [are] far less than what the states require to run their administrations and many states and local governments survive by consuming more resources than they can generate internally thanks to the generous handouts from the federation account.” – Atiku Abubakar @ Chatham House, April 2018

The accepted wisdom is that Nigerian state governments are—with a few exceptions—dependent on and survive only because of the continuing largesse of the federal government. Among the exceptions, Lagos, with internally generated revenues (IGR) at 165% of its federal allocations, stands as the poster child. But as we have argued before, even Lagos does not earn enough, and that truth points towards a structural cause of the weakness of state earnings. Even allowing for other factors like corruption and inefficiencies, it is clear that structural factors limit the earnings capacity of Nigeria’s states, making Lagos’ relative success difficult to replicate in the short run.

A look at how Nigeria divides collectible tax across the tiers of government is a good place to begin examining these structural issues (see Figure 1). The Federal government has the rights to Company Income Taxes, Value Added Taxes, Petroleum Profit Taxes, etc., all of which are closely linked to formal business activity. State governments, on the other hand, raise the bulk of their taxes from individuals, e.g. through personal income taxes—PAYE* and Direct Assessment taxes—but also through those raised by the various ministries, departments and agencies (MDAs), or through road taxes. Finally, Local Governments collect a bunch of taxes like shop and kiosk rates, radio licences, etc. that are related to small and informal business activity. 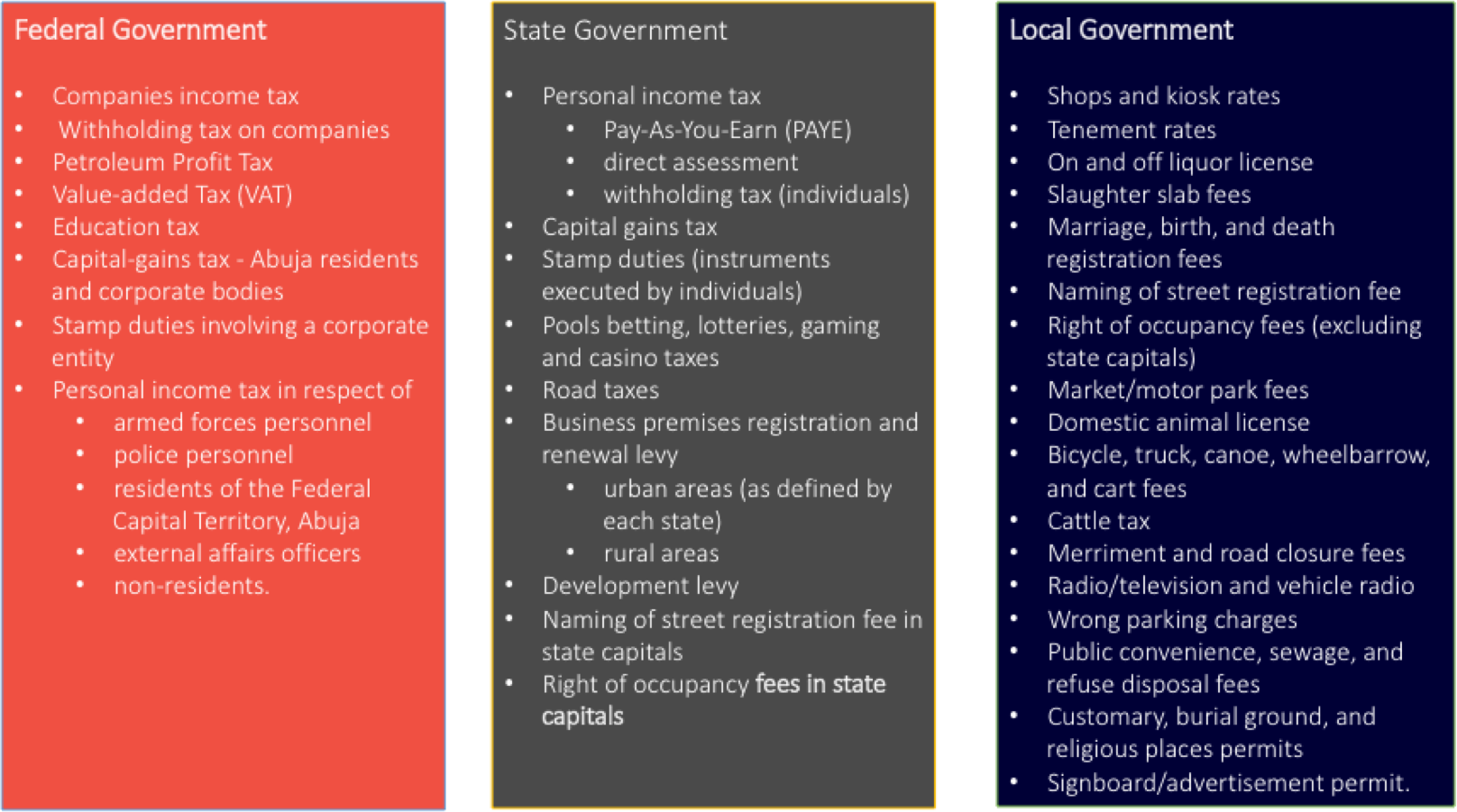 This division explains why state governments raise so little in taxes. First, let us consider the relationship between the right to collect and the ease or efficiency of collection. It is much easier to collect taxes from the formal sector than the informal. In the same light, it is easier to collect from larger organisations than a bunch of smaller organisations or individuals. With the current sharing formula, the implication is that the rights to the bulk of easily collectible taxes in Nigeria are currently allotted to the federal government while the other arms of government struggle to gather taxes from relatively disperse and largely informal sources. As a result, states struggle. A more relevant consequence of the division is the delinking of economic activity in a state from the amount of taxes raised by them. That explains why Lagos collects so little tax compared to its GDP. 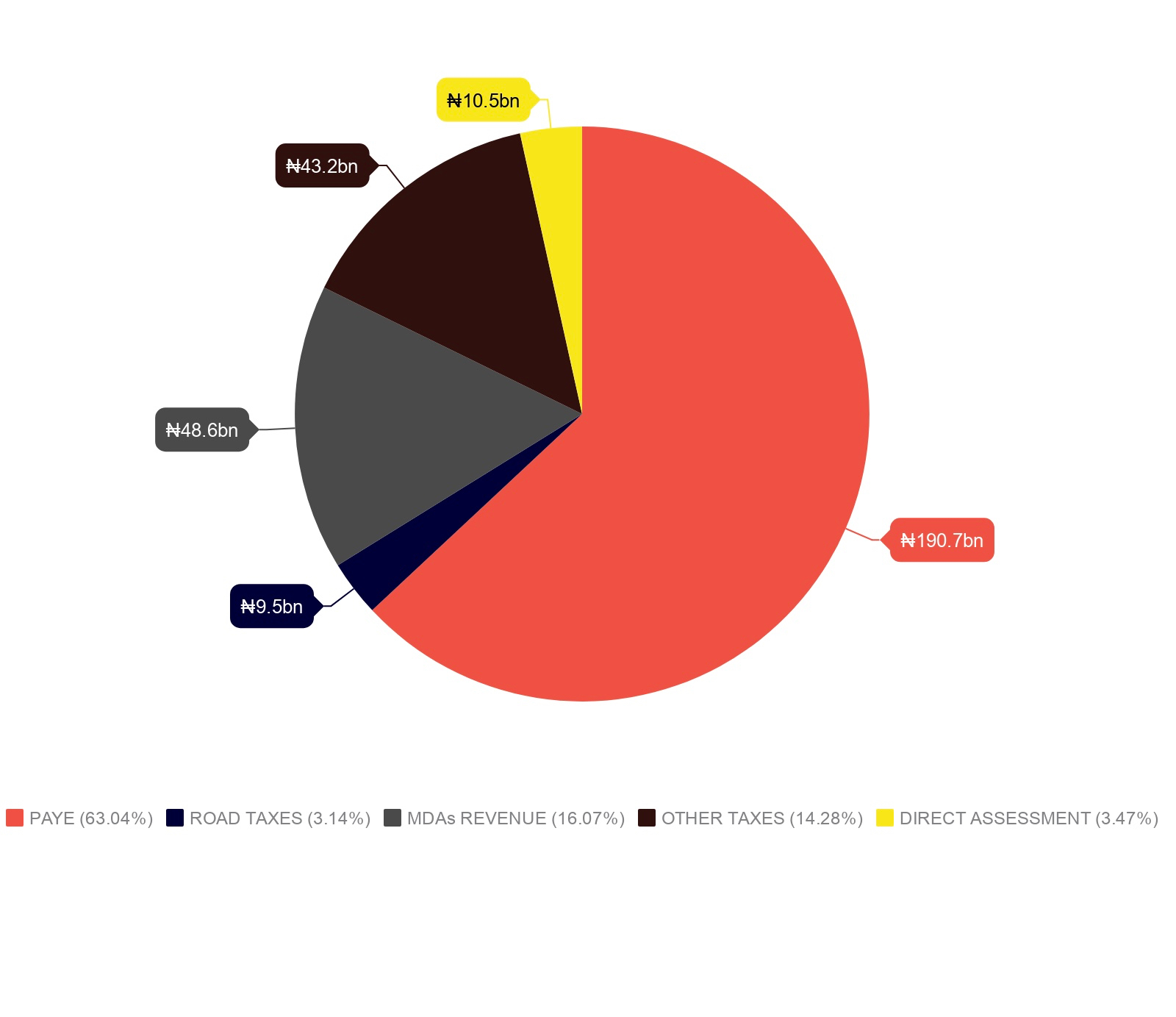 The reality is that Lagos’s relative success (compared to the others) has had little to do with the vibrancy of its tax authorities. For example, in 2016, the combination of PAYE and MDA revenues accounted for about 80% of the taxes raised. As Lagos benefits from having a high concentration of formal workers, it is able to raise a copious amount of PAYE taxes (63% of revenues in 2016) but very little of anything else. While the perennial complaints of multiple taxation and harassment by its revenue generating agencies would have led one to believe that a lot of its revenues would come from the MDAs, we are confronted with the reality that in 2016, it was able to collect barely more than neighbouring Ogun State which has a mere fraction of the economic activity (MDA revenues: ₦48bn vs ₦40bn), with MDA revenues contributing only 16% of the total. And in spite of a large population of entrepreneurs and small-scale businesses, direct assessment taxes are a pitiful 4% of the total.

Beyond explaining the generally low tax take, the biggest insight from the foregoing is that the current tax system creates a significant misalignment of incentives at the state level when it comes to fiscal issues. Since the taxes that Lagos collects are only indirectly linked to economic activity, there is a weaker incentive to ensure that businesses thrive. For example, the Lagos State government would care more that workers remain resident in the state to secure PAYE, and less about whether companies generate robust profits which would boost CIT. Moreover, state governments must always remember that companies don’t vote, but people do. As a result, attempts to raise taxes very quickly butt against political considerations as those taxes are generally considered irritants by the populace. And of course, we cannot discount the incentive to free ride and rely on revenues raised by the Federal Government.

What Nigeria needs is a fiscal structure that connects business and residents more closely to the arm of government whose activities are likelier to impact them. Today, for most Nigerians, that is the state government. A move to states collecting the bulk of revenues in their domain while remitting portions of that to the centre will be more equitable and could solve multiple problems in one fell swoop. For one, there will be better visibility of the total tax burden on every individual and business which can help with streamlining taxes and reducing multiple taxation. Second, the visibility allows the government to target ease of doing business initiatives on portions of the economy where such efforts can boost returns due to the creation of a direct feedback loop between improved productivity and government revenues. The improved clarity also allows for the design of new tax schemes for underrepresented sectors or populations, providing new inroads to the perennial problem of expanding the tax base. Lastly, there is a potential to get states competing with each other to attract economic activity with a combination of incentives including fiscal measures. This is important as if there is anything Nigeria needs more of, its competition.

*Either the Pay As You Earn (PAYE) taxes deducted from worker’s salaries at-source or the direct assessment taxes that rely on individuals declaring and paying the right amount of taxes on their income.