This article is a long-read. It was written after a trip by Stears journalist, Aisha Salaudeen, to Port Harcourt, in order to investigate the 'dark smog' covering the city.

In November 2016, residents of Port Harcourt, Rivers State woke up to find their city covered by a thick fog of black powdery dust, known as soot. “It was almost random. I started to notice one morning that the air was different and mucky. There were strange thick particles all over the place,” says Ronke Adekoya, a resident of Abuloma, a community in Port Harcourt. “Since then, I’ve had to wash my car and clean the house every day. Not doing that leaves dark particles from the soot all over the place. It’s very filthy.” 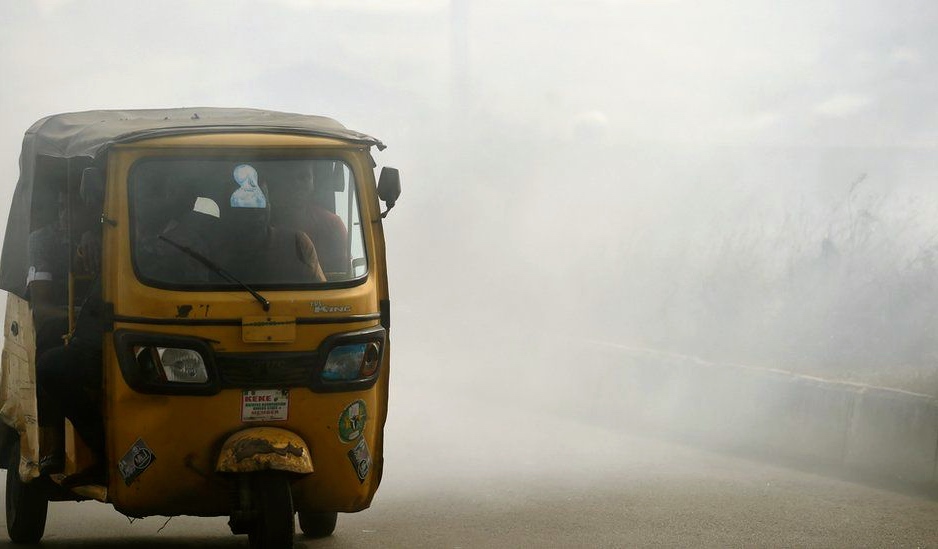 Situated in the oil-producing Niger Delta, the city of Port Harcourt is no stranger to pollution. For decades, it has been plagued by smoke flares from burning of waste and oil spills. But, the emergence of soot, one of the deadliest forms of air pollution, poses a different kind of hazard to residents of the state.

Residents have identified the continuous burning of waste and illegal oil refineries as the cause of the particles that have covered the city for more than a year now, pointing to years of crude oil theft from pipelines, known as Illegal bunkering, in Port Harcourt and neighbouring towns.

Illegal bunkering involves syphoning crude oil from pipelines and storage facilities. It is usually done by local bandits, who often favour brute force, using chainsaws and sharp blades to cut into pipes transporting crude oil, causing pollution, and sometimes, even accidents. At their most forceful, they blow up pipelines and gather the crude. “The stolen crude is put in drums and burnt far away in the bush over a long period of time. After the burning process, it is sieved,” explains Mohammed Bashir, an oil and gas expert, as he describes the process of bunkering. “This process of refining the oil is not going to give the best of diesel or AGO (automated gas oil), but it is usable. This is what the bandits put in drums or jerry cans and sell illegally,” he says. 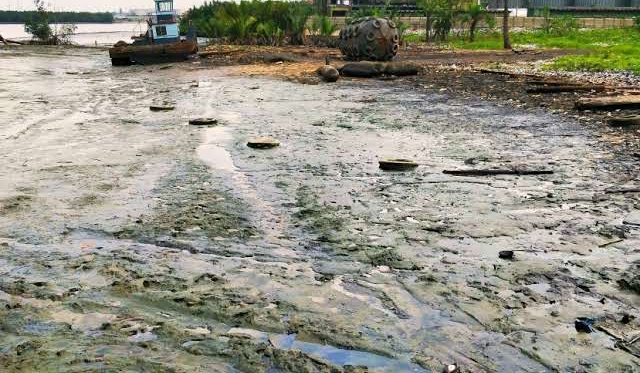 Crude oil theft is rampant in the Niger Delta, and some estimates suggest Nigeria loses $1 billion each year to activities in the West African bunkering market. In Port Harcourt, the crude is mostly burned in the creeks, in places like Isaka, Borokiri and Kalabari. And in Borokiri, traders openly hawk the illegally refined oil. Men, women and children trek the city with drums of illegally refined diesel or petrol for sale. Many are aided by the security officials who ought to be curbing the activity. “The police and military officers are friends. If you pay them enough, they will let you carry on selling your oil without disturbing you. Sometimes they even buy for themselves too,” reveals Tony Edewor, an ex-bunkerer.

Today's soot is the result of decades of illegally burning crude to derive petrol and diesel.  “The soot is a byproduct of burning oil. The continuous act over the years is what has led to the soot. The particles accumulated over time and are now being carried miles away from the burning sites,” warns Amah Onyedikachi, an environmentalist and a resident of  Port Harcourt. 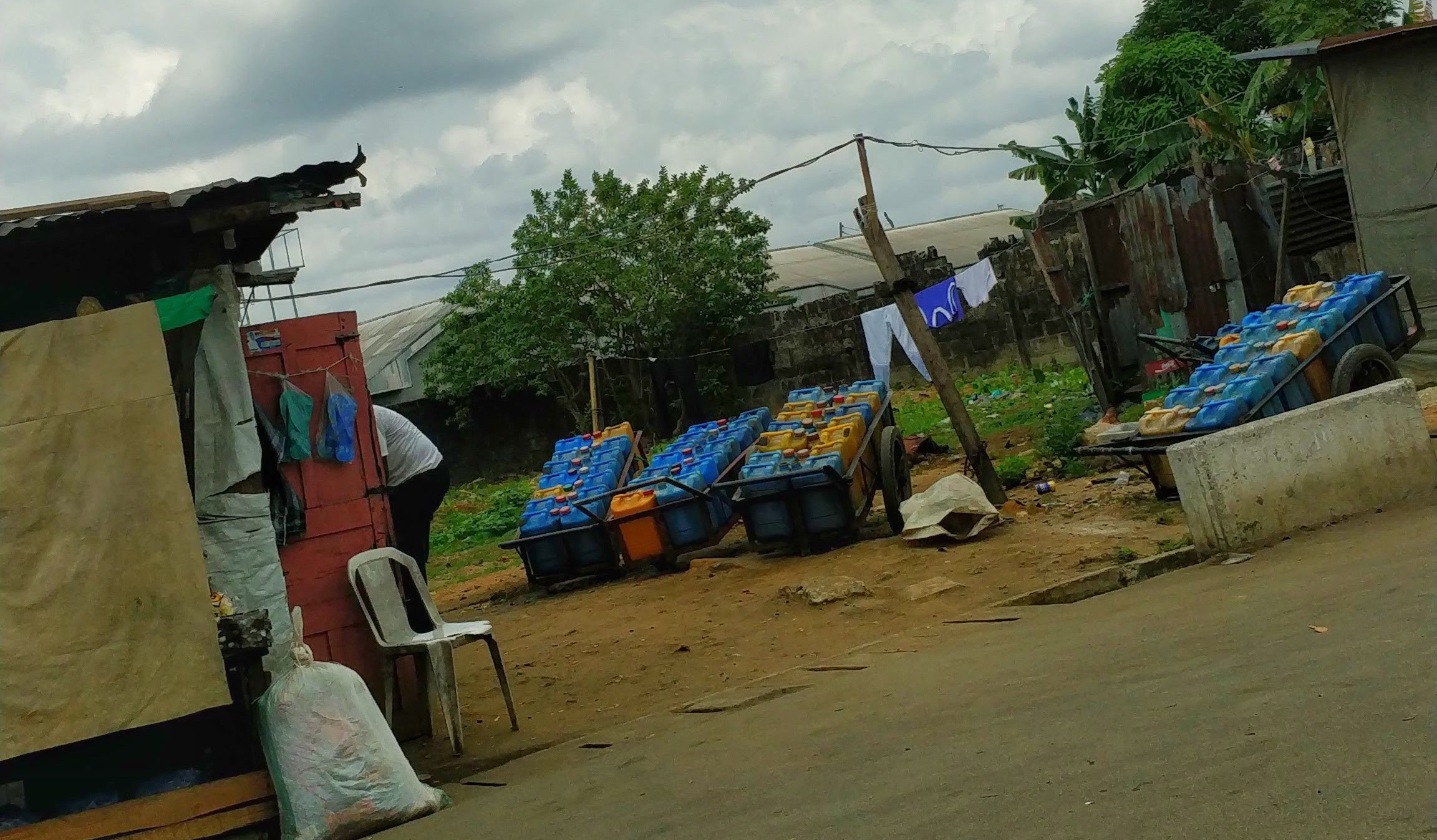 Selling the 'refined oil' is done in the open.

Four of the worst cities for air pollution in the world as listed by the World Health Organisation are in Nigeria. This means that Nigerians are generally exposed to hazardous air pollution, and this becomes alarming when the soot is considered. Residents of Port Harcourt, for example, are exposed to a higher likelihood of coronary heart disease, asthma, flu, bronchitis and other respiratory illnesses because of the soot.

One of these residents, Tega Nwanze, says she moves around the city with a mask to reduce the effect of the soot. “My daughter is just a year old, and she falls ill too often now. I try to keep her indoors as much as I can because she reacts to the soot a lot. Its either she has a cough or her breathing is funny,” she says.

The soot is such a public health problem because the particles are so small that they can easily get into the bloodstream and even cause heart attacks. Medical practitioners in the state have already reported seeing the impact of the soot, with many admitting a rise in consultations relating to breathing difficulties and respiratory tract infections.

The soot issue also has wider environmental effects. In the long run, it can cause lake acidification, while compounds like nitrogen oxides, when mixed with moisture, can cause acid rain. When carried by the wind or water, this acidic content depletes the nutrients in the soil and affects vegetation. All of this in turn damage farmlands for crops and water for humans and fish alike. 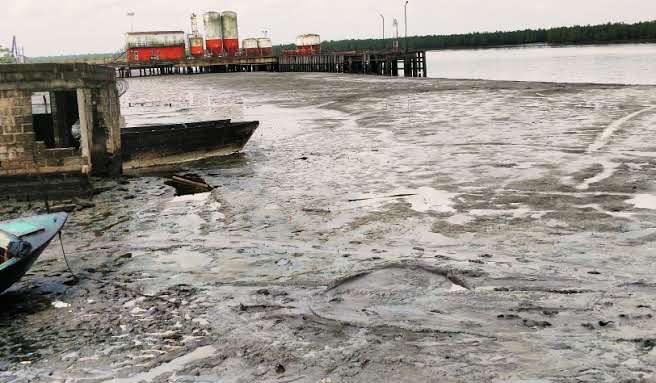 Livelihood for fishermen is no longer possible

“There is too much oil in the water, so I barely get any fish to sell. These boys transporting refined oil through their boats spill oil killing all the fish. If you look closely at the water, you will see oil,” says one fisherman at the Port Harcourt tourist beach. “On the days that I am lucky to get a catch, I still don’t sell enough because my customers cut open the fish and find black soot inside. It has not been an easy year for me.”

Small businesses around the riverine areas, where the soot is most noticeable, have had to move to new locations. Residents of Rumosi and Rumuodumanya, in particular, are migrating to safer parts of the city.

In February 2017, the Rivers State Ministry of Environment declared the soot an “emergency situation”. Shortly after, an asphalt processing plant said to be producing thick smoke contributing to the soot briefly shut down. In the same month, Nyesom Wike, Governor of Rivers State, established a committee to investigate the cause of the soot and suggest possible ways forward.

The committee's report suggested that the soot emerged as a result of the destruction of Illegal refineries by security agencies. The proposed narrative is that the police and military identify and destroy illegal refineries in the region, and the resulting smoke has eventually formed a dark cloud over the city. Based on these findings, Nyesom Wike opined that there is nothing his administration can do regarding the soot, as tackling security agencies is not within the purview of the state government.

Yet, many of those involved in oil bunkering and selling illegally refined petroleum products suggest that the state government can stop them if they want, but choose not to. According to Mr. Edewor, "the government will not do anything about it. They used to tell us that the only reason why they are letting all of it slide is that they know we will move to more dangerous activities like armed robbery and kidnapping."

Unsurprisingly, residents of the state are infuriated by the perceived laxity of the government, and some believe the government does not care. “Nothing has been done since 2016. There have been protests on and off social media about our predicament with little change. Nyesom Wike closed down one asphalt plant and went back to sleep like that is enough to fix things,” accuses Funmi Adesanya, a resident of Gulf Estate. For now, it appears that the state government is unwilling to take concrete steps towards addressing the environmental disaster, choosing to look instead to the Federal Government which has shown even less interest in the situation. 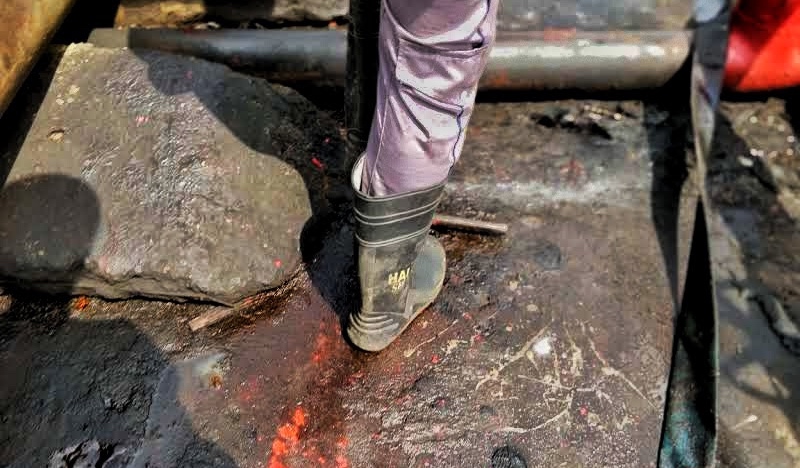 Nothing significant has been done yet.

Residents of Port Harcourt have taken to social media with the hashtag #Stopthesoot, sharing pictures and stories about the dangers and effects of the soot. All with the hope that the appropriate authorities – or anyone else – can work on a more comprehensive solution to the soot issue.

Meanwhile, the illegal bunkering carries on, and as long as it continues, the residents of one of Nigeria's wealthiest states must come to terms with life with three constants: death, taxes, and soot.