Ibrahim Bello has been working in West Africa’s largest gadget market for close to a decade. “I am a laptop mechanic. I provide IT support to SMEs and large organisations,” he explains, adding, “I repair laptop motherboards, do hardware and software upgrades. I also do data recovery, sell, swap and buy laptops.”

Sitting in Otigba, Ikeja, the capital of Lagos State, Nigeria, the market, popularly known as “Computer village” houses over 3,000 Information Technology (IT) SMEs. Here, in a technology community to match anywhere on the continent, hundreds of people like Ibrahim make a living from trading and repairing all sorts of gadgets. 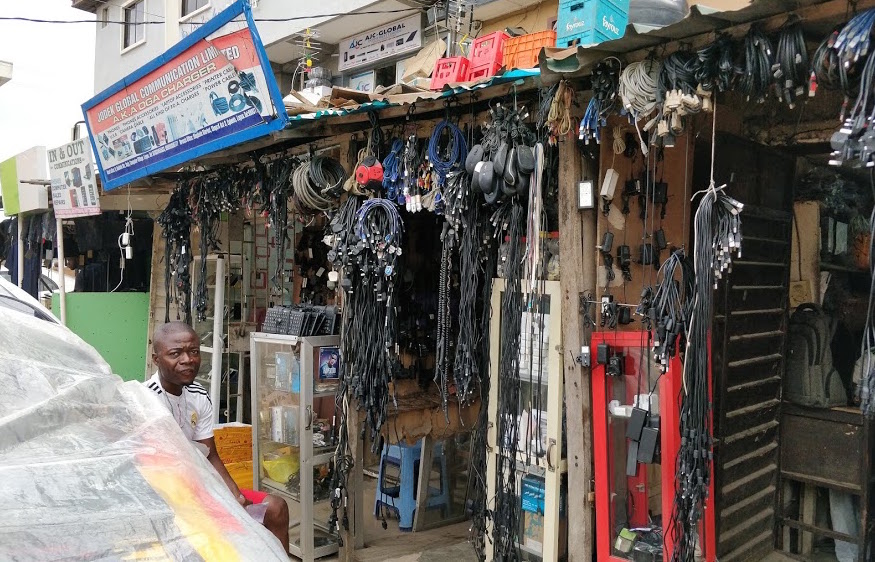 Before Otigba became a market for tech products, it was just a stretch of farmlands in the 1960s. Adebola Arinde moved to Lagos at that time and still recalls how it was, as well as how the intentions of the government of the day helped shape the area. “Making Ikeja the capital city of Lagos was strategic as the government wanted to create a commercial backbone for the state,” he explains.

With support from the state government, the Ikeja local government focused on road construction to attract activity to the area. Office spaces quickly sprung up, and in 1979, the Murtala Mohammed Airport was built in what was the capital of Nigeria at the time. “A lot of agents chose Ikeja as the location for their products because of the infrastructure development and closeness to the airport,” Adebola says. “The capital city began buzzing with commercial activity,” he adds.

The government attempted to create an enabling environment, and the private sector responded. Seeing the area's potential as a hub for a major industry, traders and technology enthusiasts set up shops in Otigba to deal in IT services and equipment. What is now Computer Village was once a handful of mobile and makeshift shops until the turn of the new millennium. “Not long after the start of President Obasanjo’s regime in 1999, the market changed,” Mr Bello muses. “People started to find different types of shops to repair and exchange gadgets. It sort of became the only technology place in Nigeria; this was before it grew to be the largest in West Africa, of course.” Had Otigba caught the millennium bug?

Into the GSM era

GSM technology (Global System for Mobile) came into Nigeria in 2001 and soon transformed the country. It also transformed the artisan-ridden area, quickly evolving it into a hub for software downloads, memory cards, batteries and unlocking. “The GSM companies could not keep up with computer village which was growing fast,” Adebola Arinde, who soon opened a hardware repair shop in Otigba explains. “They lost the monopoly of mobile phone sales to the hustlers in the market who did not just sell phones but found a way to create a repair industry too.” You could buy a phone and access all your desired after-sales care: repairs, replacements, accessories. The hustlers rode on the GSM boom by creating a new industry to service a generation of first-time phone users. Computer Village was born.

Fast-forward a few years and the market has grown into a complete technology hub, generating as much as ₦1.5 billion each day. It is the go-to technology place not just for Nigerians, but for the wider West African community.

The community's apprentice culture has been key to the steady growth of the market. Within it, shop owners train young men and women in whatever they deal in – software, battery repair, used phone trading, etc. Trainees can "graduate" once they have shown a clear grasp of what they have been taught, and often go on to set up their own businesses and train others. Sometimes, in Computer Village.

“I started learning how to repair phone screens as an apprentice some years ago. My uncle had a shop where he did all types of phone screens,” says Kingsley Agu, a beneficiary of the apprentice structure. “When I became good at fixing screens, I left my uncle and set up my shop. I am currently training two boys and a girl now on how to fix screens,” he continues.

Although adopted by many parts of the country, the apprentice culture is often attributed to the South East region of the country. During the 1967 Civil War, the number of casualties suffered crippled the region's economy, and apprenticeship was embraced as a way of encouraging skill-building and resuscitating the economy. The artisans of Computer Village have borrowed from the culture, leveraging on its circularity to create a self-sustaining model of human capital investment. 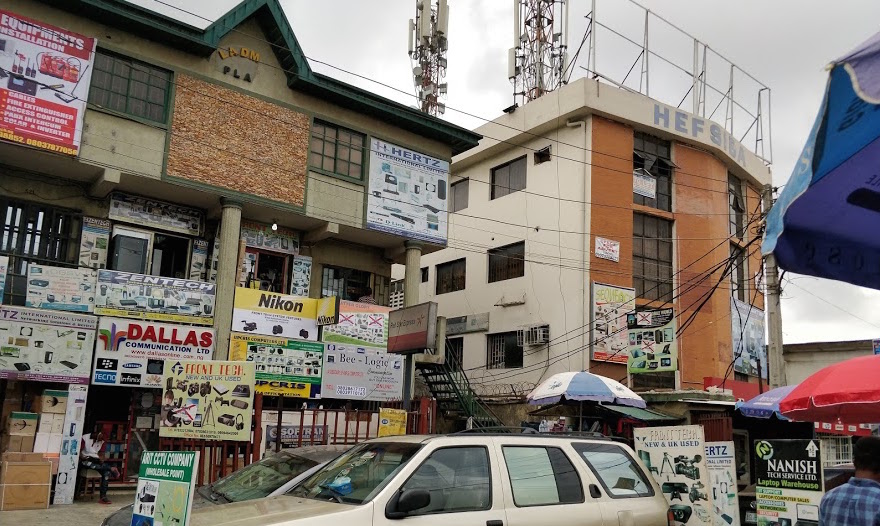 The artisans of Computer Village

Computer Village is made up of streets lined with multistorey buildings. You would find the phone and computer technicians inside these buildings, but traders prefer to be seen and either take a position out on the street or erect prominent signs to draw customers. Competition in the village is fierce, and customer attention is a precious commodity. For these traders, it pays to be able to seize customer attention quickly.

The market currently has major technology firms, including representatives of major brands like Samsung, HP, Dell, Toshiba, Tecno and Nokia. But despite its size and importance, it remains relatively unstructured, making it difficult to estimate the scope or volume of daily activity in the market.

Although the wider economics of the market remain little known, it is clear that starting a business in the area is no small feat. Setting up a workspace can be very expensive, regardless of whether you plan on trading phones or repairing them. And beyond rent, aspiring entrepreneurs often need to import or purchase parts for resale or use.

Mr Bello is unperturbed by the relatively high set-up costs in a country – and state – that remains very unequal. “On the average, it costs about ₦150,000 Naira to rent a shop or office within the market,” he informs me. But, for many people in the market, the costs are worth it as sales in the Village easily surpass alternative locations.

While Computer Village is best known for its technology-focused residents, it is also home to a number of non-tech businesses. Cloth stores and boutiques sandwich repair stores. Shoe salespeople and food vendors mingle with customers at the edge of the street as they display their merchandise on car trunks or sell them from wheelbarrows and carts. These businesses are here because customers are here. These businesses are here because Computer Village is here, and often have to pay the steep price. “Even the guys with makeshift stores and items in cars for sale have to pay for space they’re using,” says Mr Bello. 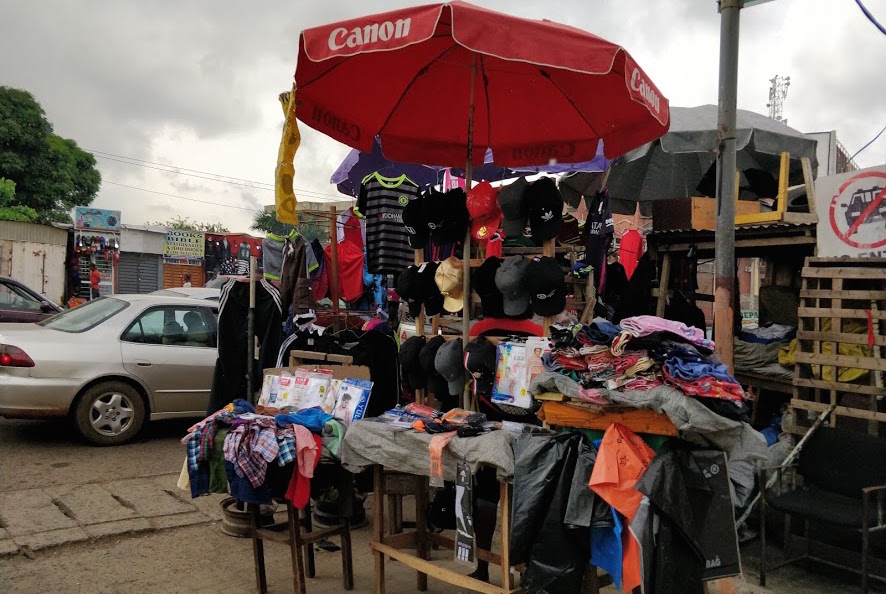 In May 2017, in a bid to decongest the market, the Lagos State Government proposed moving the mega technology hub to Kantangowa, on the outskirts of the state. The proposal has not been well-received; after all, being in the heart of the city is one of the strategic appeals of Computer Village, as it is supported by strong transport links and commercial activity. Transporting the village to the outskirts of Lagos would diminish these advantages and make the hub less appealing to investors, traders, and customers.

But, government representatives say the move will lessen congestion as the area is known for daily traffic gridlock. It is difficult to argue against that. Moreover, the current market has a poor layout, and many drainage outlets are often blocked – a condition that triggers flooding in some areas of the market when the rains come.

The relocation could also solve an issue that has plagued Computer Village for many years. Despite the domestic and global boom in technology and the rush to fund it, West Africa's largest gadget market remains relatively unloved by investors. The main sticking point is the lack of formal regulation, which makes it challenging to access credible information on businesses and the broader market, as well as worries over investor protection and informal business practices. The market has thrived despite this, but may find investors begin to circle if the move was accompanied by plans for formalisation.

Despite these, Mr Bello is unenthusiastic about the move and what the future may hold for his beloved village. “I don’t support the idea. How will current traders and existing clients survive? Instead of moving the market the government should make improvements,” he says. The move may also chase away visitors who want to avoid long trips to the proposed location.

For now, many of those who work within the market seem to be in denial. This could leave them unprepared and unable to adjust, should the relocation happen soon.

With all these challenges, and an uncertain future, one thing still holds true: Computer Village is the number one location for trading and repairing IT accessories. And wherever it is located, it will look to preserve that hard-fought reputation.